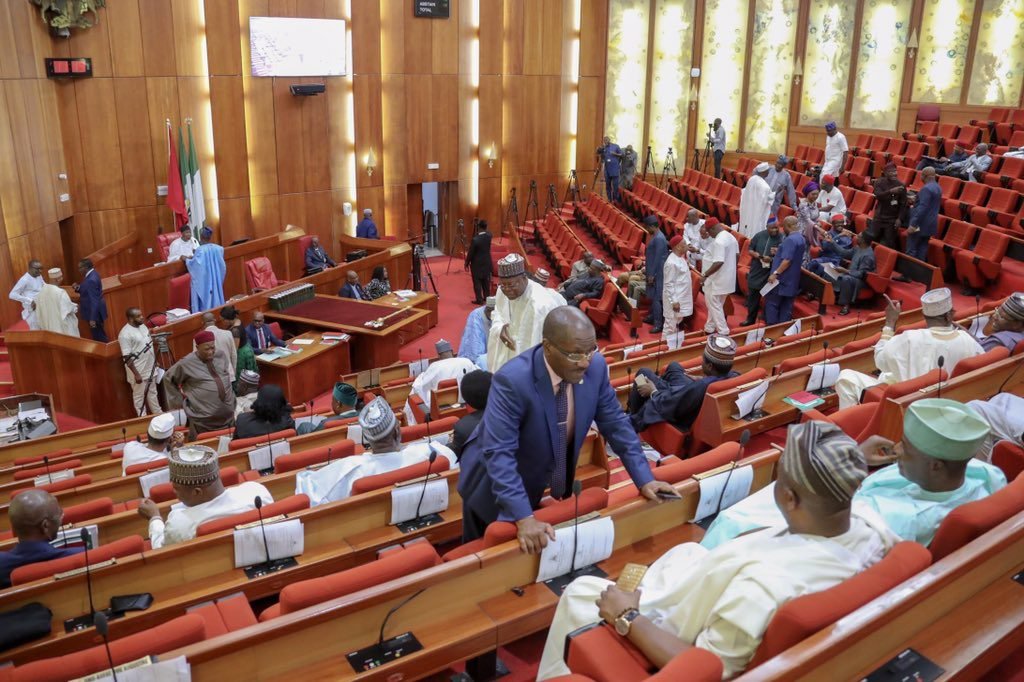 Sani- Omolori said he would , therefore , proceed to the roll call by the Clerk of the Senate, Nelson Ayewoh .

But before Ayewoh could begin the roll call , several of the newly elected members of the new Senate protested , saying a court had set aside the 2015 standing rules in place of the 2011 rules .

The High Court of the Federal Capital Territory , Abuja, sitting in Bwari , by an ex parte order , on Monday, had struck down the Standing Orders 2015 , through which Senator Bukola Saraki became the President of the eighth Senate in 2015 .

The 2011 standing rules called for an open ballot system in the election to the top Senate offices , while 2015 allowed for a secret ballot system .

Sani- Omolori resorted to using the gavel several times to restore order .
He said , “ I need to remind ( you ) that the only business of today is the election and oath- taking . And by virtue of the fact , no question is entertained . No motion shall be made. However , as a mark of respect , I think your question is whether I received any court order and my answer is no . ”
When the rowdiness continued , Sani-Omolori added , “ Distinguished senators -elect , may I remind all of you that we are here in furtherance of a fundamental constitutional duty over and above all of us . And we all must abide by the constitution.
“ I have answered your question : I have heard it ; I have not received it . I do not have a reason not to comply with court orders if I receive them and that should suffice . And like I said , I only answered this question out of respect to you . I will therefore not entertain any question further . Clerk , please go ahead . ”
With that , the inauguration continued without further protests by senators – elect .

Nnamdi Kanu vs Ralph Uwazuruike: A Fight That May Destroy Biafra

FLASHBACK: The Biafra Declaration By Ojukwu – And How The Civil War Ended

Lost His Mum, Sister And Son Within A Year – The Tragic Story Of Ex-NNPC GMD Who Died On Friday Night