Following his loss at the Appeal Court, Senator Ademola Adeleke has finally broken his silence. 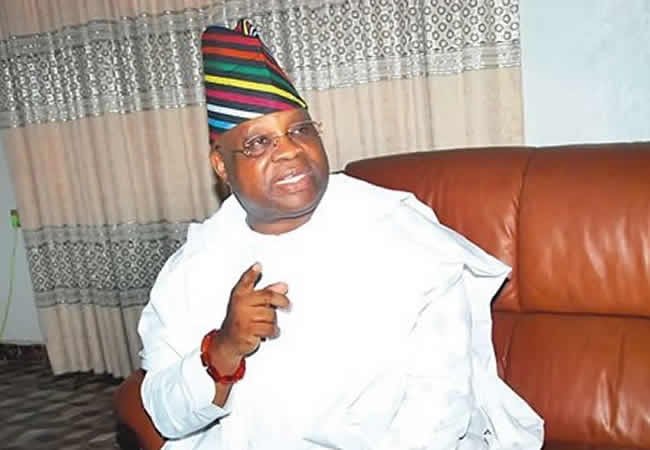 Adeleke, in a statement made available to newsmen in Osogbo on Thursday said he received the appeal court judgement with dissatisfaction.

According to him, the judgment of the appeal court relied on weak technical foundation, while the substantive issue which formed the basis of the lower tribunal judgement was relegated to the background.

“I received with dissatisfaction the judgement of the Court of Appeal on the ruling of the election petition tribunal which had duly returned me as the validly elected governor of Osun state.

“I have subsequently instructed my counsel to prepare for an appeal against today’s judgement at the Supreme Court immediately.

“Today’s judgement relied on weak technical foundation.
“The substantive issue which formed the basis of the lower tribunal judgement was relegated to the background.
“We are reviewing the full ruling and action has already commenced to appeal the judgement and ensure the eventual retrieval of the stolen mandate,” Adeleke said.
He, however, urged the people of the state not to be downcast, saying that the struggle for good governance and retrieval of People’s mandate cannot be truncated by any flawed judgement.

“We are taking the legal battle further to the topmost court in the land. I am confident the apex court will upturn today’s unsustainable ruling.
“To all members of PDP in Osun State and my campaign organisation, the struggle is now at the most critical stage.
“We cannot waiver nor slow down. We must forge ahead in high spirit until final victory is attained.
“In this endeavour, I promise to provide the leadership as the genuine governorship mandate holder in Osun State” Adeleke said.
The News Agency of Nigeria (NAN) reports that the Abuja Division of the Court of Appeal nullified the judgment of the Osun State Governorship Election Petition Tribunal.
The tribunal had in its verdict of Friday, March 22, 2019, declared the PDP and its candidate, Sen. Adeleke, the winner of the Sept. 22, 2018 polls.

However, Justice Jummai Sankey, read the lead judgment of the Court of Appeal on Thursday. Justices Abubakar Yahaya, Isaiah Akeju and Bitrus Sanga agreed with the lead verdict.

A fifth member of the appellate court, Justice Ita Mbaba, disagreed and upheld the election tribunal’s verdict that gave the victory to Adeleke.
NAN