Skip to content
You are here:Edujandon.com » News » Politics » The evil I feared in PDP has befallen me 10 times in APC – Okorocha
Politics
May 9, 20191 year ago edujandon🏅 0 Comments

The outgoing Governor of Imo State , Rochas Okorocha , on Tuesday lamented that he had been afflicted with more evils in the ruling All Progressives Congress than he would have suffered if he had been a member of the Peoples Democratic Party .

He regretted that the APC had inflicted what he called the greatest devilish political machinations against his person 10 times more than what he would have been inflicted with if he were to be a member of the PDP . 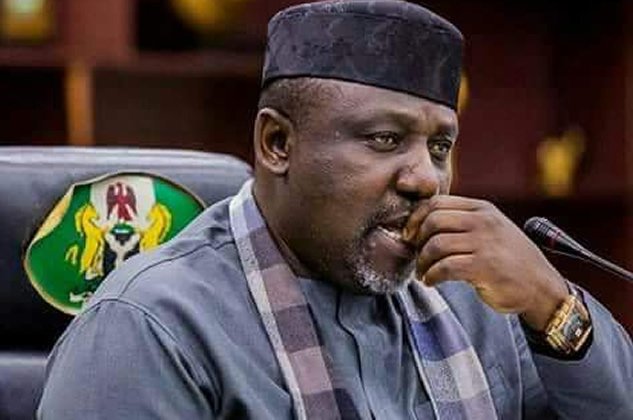 Okorocha spoke with journalists in Abuja.
The embattled governor however said he would remain in the ruling party despite alleged moves to frustrate him out of the APC.

He accused the National Chairman of the APC, Mr Adams Oshiomhole , and other unnamed leaders of the party of working with the Independent National Electoral Commission to kill his senatorial ambition.
This , he said , was being done by ensuring that he did not get his certificate of return as the duly elected senator for Imo West Senatorial District .

He said there were moves to damage his political career by his enemies .
Okorocha , who was elected governor in his first tenure as a member of the All Progressive Grand Alliance before he joined others to form the APC, said it was regrettable the evil that made him to dump the PDP for the ruling party had become more fiery .

He said , “ The evil I feared in the PDP has befallen me 10 times in the APC. Last week , I wrote a letter to INEC for the first time informing them of their wrongdoings and illegal actions to withhold my certificate on mere allegation of duress which was never founded , neither was there any committee set up to investigate the matter .
“ So, INEC on its own believed the reports of the Returning Officer without investigating the authenticity of the accusation . So, there was no issue of fair hearing at all .
“ What is important here is that INEC does not have the power to withhold the certificate of return , having declared the result .

“ I believe the INEC chairman is up to a game with the chairman of the APC , who is being used to frustrate my coming to the Senate, and this is politically motivated . I’ ve given INEC enough time to correct itself and do the needful and issue me my certificate of return but to no avail .

“ The withdrawal was made by one of their members of staff who said that Festus Okoye, a commissioner in INEC , had threatened to sack him if he did not withdraw it . So, there is a huge threat going on in INEC .

“ Festus Okoye is presently being used as the hatchet man ; he has gone to the tribunal in Imo asking for the withdrawal of the affidavit that has been filed defending the APC. ”

Okorocha wondered what the electoral body would do with the certificate of return .
He added that the image of the commission had been “ bastardised . ”
He said , “ I wonder what they want to do with the certificate , if they don’ t give it to me, who will they give it to ?
“ Maybe they will give it to Festus Okoye because he is from my senatorial district but what they are doing is presenting INEC as a lying organisation and that is dangerous for our democracy because , as it stands right now , the image of INEC is bastardised .
“ What it means is that tomorrow somebody can withhold the certificate of return of anybody because you don’ t like his face, because you feel that he wants to politically challenge you in future . ”

Although he is said to be close to President Muhammadu Buhari , Okorocha however said he did not want to bother the President with such an issue especially as it concerns INEC .

“ If you know the President well , you will know that he will never intervene as he will only keep mute . But whether President Buhari speaks or not , INEC should do the right thing by giving me my certificate of return , ” he added .

Return to a democratic party , PDP tells Imo gov
Meanwhile , the PDP has urged Okorocha to return to its fold , saying the views of its members will not be discarded .
It also said that unlike the APC, there was no one or group that could lay claim to the ownership of the PDP .

The National Chairman of the party , Prince Uche Secondus , who spoke with one of our correspondents , said the PDP “ will always treat its members with respect and allow for robust debate on issues affecting the party and our members. ”

He added , “ Unlike the APC that is owned and controlled by different cabals , the PDP is owned by the people and they are the ones that determine its present and its future . So, I will expect all those that are suffering and smiling, all those who have been beaten by rain and chased out of the party they formed and the house they built without a solid foundation to return to their natural abode where there is peace and tranquility . ”
Efforts to reach the APC National Publicity Secretary , Mallam Lanre Issa- Onilu , were unsuccessful.

He neither returned phone calls nor replied to a text message sent to him by one of our correspondents as of the time ( 8 :30 pm ) of filing this report .
CJ rejects Okorocha ’ s petition , refuses to re – assign CoR suit
Meanwhile , the Chief Judge of the Federal High Court, Justice Adamu Kafarati, has rejected Okorocha ’ s petition in respect of his suit challenging INEC ’ s refusal to issue him a certificate of return as a senator -elect .

Okorocha had petitioned Justice Kafarati requesting that the case be withdrawn from Justice Okon Abang of the Abuja Division of the court and be reassigned to another judge of the same division .
The governor had anchored his petition on a claim that the opponents to his suit were confident before hearing could commence that Justice Abang would rule in their favour .

At the Wednesday ’ s proceedings Okorocha , who is of the APC opposed the PDP ’ s motion seeking to be joined in his suit .
Okorocha , through his counsel , Mr Kehinde Ogunwumiju ( SAN) , objected the PDP ’ s application on the grounds that the application was brought in bad faith .
But PDP ’ s lawyer, Mr Stanley Imo , held that the objection to his client ’ s application for joinder by Okorocha was not well -founded .
Justice Abang agreed that the matter was time sensitive but assured all the parties of fair hearing .

He adjourned the matter until May 9 ( Thursday ) to rule on whether or not to join the PDP as a party in the suit.

INEC had refused to issue Okorocha the certificate of return on the basis that the Returning Officer for the February 23 election , Prof Francis Ibeawuchi , said he had announced the outgoing governor as winner of the senatorial election under duress.

Okorocha had subsequently filed his suit challenging INEC ’ s decision to withhold the certificate of return due to him as the winner of the election .