Skip to content
You are here:Edujandon.com » News » Court Orders EFCC, DSS, CCT & Others Not To Probe Saraki
News
May 15, 20191 year ago edujandon🏅 0 Comments

The EFCC, ICPC, the Code of Conduct Tribunal and others have been stopped from conducting new probe on Senate President Bukola Saraki.

A Federal High Court in Abuja has ordered the Economic and Financial Crimes Commission (EFCC), the Inspector-General of Police (IGP) and three others not to proceed with their renewed probe of Senate President Bukola Saraki. 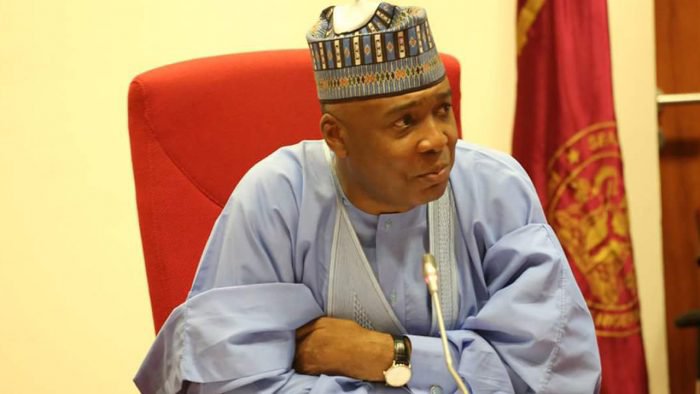 According to TheNation, also to be affected by the restraining orders issued on Tuesday by Justice Taiwo Taiwo are the Department of State Services (DSS), the Independent Corrupt Practices and other related offences Commission (ICPC) and the Code of Conduct Tribunal (CCT).

Arguing the ex-parte motions, Saraki’s lawyer, Sunday Onubi, said unless restrained, the respondents would cause irreparable damages to the applicant’s rights before the substantive suits were heard.
Onubi prayed the court “for an order directing the respondents, by themselves, their servants, agents, privies or officers to stay all actions in connection with the subject matter of this suit, pending the hearing and determination of the originating motion on notice.”
He said the motion was supported by 37 paragraphs affidavit, deposed to by the applicant (Saraki), with four exhibits attached, marked ABS 1, to ABS 4.
Onubi said he also filed another 37 paragraphs affidavit of urgency, with four exhibits.

“There is no doubt that, in making the interim reliefs or orders, the court is guided, even in its exercise of its discretion judicially and judiciously applied by the law and statues.
“Here comes in the rules and of course, the Constitution of the Federal Republic of Nigeria.
“One of the considerations, which is paramount, is the hardship the applicant may go through, between the service of the processes and the hearing of the main motion, amongst others.
“I have gone through the affidavit in support of the ex parte application particularly paragraphs 8, 9, 10, 11, 12, 13, 14, 15, 16, 17, 18, 19, 20, 20, 21, 22, 23, 24, 25, 26, 27, 28, 29, 30, 31, 32, 33, 34, and 35.
“I also duly considered the averments in the affidavit of urgency and all the exhibits attached.
“I am of the view, after due consideration of the aforesaid averments, that this court ought to make the order being sought by the applicant pending the hearing and determination of the orignating motion on notice.
“To do otherwise and not to restrain the respondents by asking them not to stay actions will result in the court being faced with a fait accompli.

“I further come to my conclusion that the applicant is entitled to this order in view of the trite law that once the court is seized of a matter, parties are bound not to do anything that will make nurgatory any order of the court by staying action.
“This is akin to ordering that parties maintain the status quo. However, the court must make a positive order.
“Therefore the application made ex parte pursuant to the law, succeeds. The respondents are hereby directed, either by themselves, their servants, agents, privies or officers to stay all actions in connection with the subject of this suit pending the hearing and determination of the origination motion on notice.

“I further order that the respondents shall be served fort with the originating processes and they shall file, within five days of being served, their responses.
“The hearing is fixed for May 23” , the judge said.
Justice Taiwo made similar pronouncement in relation to the second motion.

“Everything Just Tire Me, Just Living In Fear” – Funke Akindele