Oshiomhole, however, said that the South-South is being considered for the office of the deputy Senate president.

Except the move drowns in the murky waters of the All Progressives Congress (APC) politics and the raging National Assembly (NASS) leadership crisis, the South-South geopolitical zone may produce the next deputy Senate president.

APC national chairman, Comrade Adams Oshiomhole, declared yesterday that except for the Senate president and speaker of the House of Representatives, which have been settled, other NASS positions were yet to be zoned. 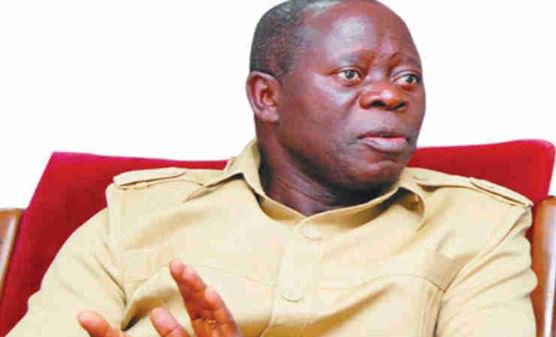 Oshiomhole, however, said that the South-South is being considered for the office of the deputy Senate president.
Mr. Simon Egbebulem, stated that APC was yet to zone the Senate top offices, but added that the South-South was in the picture for the office of deputy Senate president.
There were media reports that the party had already zoned the position to the South-South, especially to Oshiomhole’s kinsman, Senator Francis Alimekhena, who has been re-elected to represent Edo North Senatorial District in 9the Assembly.
The report accused him of trying to corner the office for Alimikhena, but the APC chairman described the insinuations as untrue.

Oshiomohole said: “Nothing like that has been done. Nobody has said this is the person for that position. But the party is working on how to share the position so that every part of the country will have a sense of belonging.

“They have started the process and the party is backing Femi Gbajabiamila and Ahmed Lawan for the position of Speaker and Senate president respectively but for other positions, the party is still working to sort out these offices,” he said.

Asked if the South-South was being considered for the deputy Senate presidency, the media aide replied affirmatively, but stressed that the final decision lies with the party.

Other major contenders for the office are Senators Robert Ajayi Boroffice, Oluremi Tinubu and Ovie Omo-Agege.

Omo-Agege is favoured to clinch the position because of his wide network within the APC coupled with tha fact that he has commenced intensive lobby amongst his colleagues.
Bago’s Speakership Bid Gains Traction
For the speakership of the House of Representatives, Hon. Mohammed Umaru Bago (North Central) has gained more support of those campaigning for the zone to produce the next occupant of the office.
They argued that since the Senate presidency has been zoned to the Northeast, Hon. Abdulrazak Namdas (North-East) and the current House leader, Femi Gbajiabiamila, the purported APC’s anointed candidate, should step down for Bago because the Southwest has clinched the vice president’s slot.

Gbajiabiamila hails from Lagos State in the Southwest where Vice President Yemi Osinbajo is a prominent indigene.
Bago’s (APC Niger) supporters insisted last night that he is the best to represent the North Central zone, stressing that the region plays the balancing act in the nation’s politics and should not be denied the speakership slot for the fact it has never produced a presiding officer in the Green Chamber.

Already, the North Central Caucus of the Lower House has added its voice to the debate and clamour as it called on the APC to do justice to all concerned.

The caucus said: “We want to use this medium to acknowledge the supremacy of our party, the APC, in addressing the issue of zoning of positions in an equitable, just and fair manner that will foster unity and cordial relations among members of our party and our colleagues from the other political divides.

“We are confident of the ability and capacity of the national leadership of the APC to do right to all in order to advance national cohesion, balance of power and federal character.

“It is in this regard that we humbly wish to appeal to our great party to strongly consider the North Central geo-political zone for the position of speaker of the House of Representatives in the 9th Assembly.
“We are mindful of the fact that events that surrounded the emergence of leaders of previous assemblies can provide ample guide for our great party to avoid past pitfalls and engender harmony, peace and stability in the House of Representatives as partners in progress with the executive,” the caucus said through Hon. John Dyegh (Benue) at a press conference.

Hon. Ahmed Idris Wase from Plateau State in the North Central zone is also in the speaker’s race.

Meanwhile, House of Representatives members-elect from Benue and Plateau States have endorsed the candidacy of Hon. John Dyegh (APC, Benue) for the speaker’s office for balance, justice and equality.
Dyegh is the fourth contestant to officially declare his intention forthe race. He is also the third member-elect from the North Central contesting the position after Bago and Wase.