The lawmaker from Borno State had met with the Vice President behind closed-doors at the Presidential Villa, Abuja, yesterday.

Ali Ndume, a former Senate Leader, has given reason for his meeting with the Vice President, Yemi Osinbajo.

Ndume disclosed that his meeting with Osinbajo was centred around humanitarian issues in his state, Borno State.
The lawmaker from Borno State had met with the Vice President behind closed-doors at the Presidential Villa, Abuja, yesterday.
When asked by State House Correspondents if he would step down for Ahmed Lawan, he asked rhetorically: “Me?”. 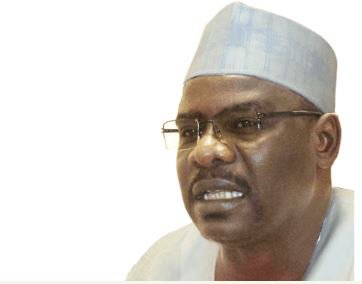 “This is not the time to talk now because I am still holding consultation,” he stated.
He further declined to speak further on the Senate Presidency race.
However, Ndume, while speaking with The Nation, disclosed that he never discussed his ambition with Osinbajo.

According to Ndume: “My visit to the vice president has nothing to do with my ambition. I did not discuss any political issue with him.

“The vice president has been deeply concerned on the challenges in Borno State.
“I normally get in touch with him because of humanitarian issues in our state. This was what I went to discuss with him.
“I did not talk about my aspiration to be the next President of the Senate and the vice president also didn’t raise it.”