Easter reminds us that hope must never be lost for as dark as the road may seem, there always lies light at the end of it. May all your prayers be fulfilled. 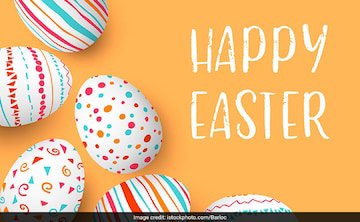 May Jesus Christ bless you and your family with abundant happiness and inner peace.

Easter Bible Verses on the Resurrection

1. “The Christ will suffer and rise from the dead on the third day, and repentance and forgiveness of sins will be preached in his name.” (Luke 24:46-47)
2. “He was delivered up for our trespasses and raised for our justification.” (Romans 4:25)
3. “Christ died for our sins according to the Scriptures, that he was buried, that he was raised on the third day.” (1 Corinthians 15:3-5)
4. “According to his great mercy, he has caused us to be born again to a living hope through the resurrection of Jesus Christ from the dead.” (1 Peter 1:3)
5. “For as by a man came death, by a man has come the resurrection of the dead. For as in Adam all die, so in Christ shall all be made alive.” (1 Corinthians 15:21-22)
6. “For if we have been united with him in a death like his, we shall certainly be united with him in a resurrection like his.” (Romans 6:5)
7. “We know that Christ, being raised from the dead, will never die again; death no longer has dominion over him.” (Romans 6:9)
8. “…that I may know him and the power of his resurrection, and may share his sufferings, becoming like him in his death…” (Philippians 3:10)
9. “I am the resurrection and the life. Whoever believes in me, though he die, yet shall he live, and everyone who lives and believes in me shall never die. Do you believe this?” (John 11:25-26)
10. “…just as Christ was raised from the dead by the glory of the Father, we too might walk in newness of life.” (Romans 6:4)
11. “If the Spirit of him who raised Jesus from the dead dwells in you, he who raised Christ Jesus from the dead will also give life to your mortal bodies through his Spirit who dwells in you.” (Romans 8:11)
12. “Who is to condemn? Christ Jesus is the one who died—more than that, who was raised— who is at the right hand of God, who indeed is interceding for us.” (Romans 8:34)
13. “If you confess with your mouth that Jesus is Lord and believe in your heart that God raised him from the dead, you will be saved.” (Romans 10:9)
14. “For you will not abandon my soul to Sheol, or let your holy one see corruption.” (Psalm 16:10)
15. “He will swallow up death in victory; and the Lord GOD will wipe away tears from off all faces.” (Isaiah 25:cool.png
16. “But he was wounded for our transgressions; he was crushed for our iniquities; on him was the chastisement that brought us peace, and by his stripes we are healed.” (Isaiah 53:5)
17. “As for me, I know that my Redeemer lives, and at the last He will take His stand on the earth.” (Job 19:25)
18. “God raised the Lord and will also raise us up by his power.” (1 Corinthians 6:14)
19. “…who through him are believers in God, who raised him from the dead and gave him glory, so that your faith and hope are in God.” (1 Peter 1:21)
20. “If Christ has not been raised, your faith is futile and you are still in your sins.” (1 Corinthians 15:17)

Christian Quotes on the Resurrection of Jesus Christ

21. “The message of Easter is not that Jesus is alive, it is so much more. The message of Easter is that Jesus has risen.” (Colin Smith)
22. “Our sin reached its full horror and found its most awful expression in the cross.” (Colin Smith)
23. “The tomb of Christ is famous because of what it DOES NOT CONTAIN.” (Sam Morris)
24. “We live and die; Christ died and lived!” (John Stott)
25. “The resurrection of Jesus changes the face of death for all His people. Death is no longer a prison, but a passage into God’s presence. Easter says you can put truth in a grave, but it won’t stay there.” (Clarence W. Hall)
26. “The primary source of the appeal of Christianity is Jesus – His incarnation, His life, His crucifixion, and His resurrection.” (K. Latourette)
27. “Luke associates John with Peter in Acts, when, after the Resurrection, that strange boldness had come upon the disciples.” (Alfred Noyes)
28. “The cross is a one time visual representation of God’s grief over sin.” (Dean L. Harvey)
29. “Live in the awareness that Christ lives and that He lives in His people.” (Julien B. Weil)
30. “The cross is the victory, the resurrection is the triumph…The resurrection is the public display of the victory, the triumph of the crucified one.” (Leon Morris)
31. “The best proof that Christ has risen is that he is still alive. And for the immense majority of our contemporaries, the only way of seeing him alive is for us Christians to love one another.” (Louis Evely)
32. ♪ Christ the Lord is risen today / Sons of men and angels say / Raise your joys and triumphs high / Sing ye heavens, and earth reply. (Charles Wesley, “Christ the Lord is Risen Today”)
33. “All of heaven is interested in the cross of Christ, hell afraid of it, while men are the only ones to ignore its meaning.” (Oswald Chambers)
34. “According to the laws of legal evidence used in courts of law, there is more evidence for the historical fact of the resurrection of Jesus Christ than for just about any other event in history.” (Harvard Law Professor Dr. Simon Greenleaf)
35. ♪ Hear the bells ringing they’re singing “Christ is risen from the dead!” / The angel up on the tombstone said / He is risen just as he said! (Keith Green, “The Easter Song”)
36. “There is no historic incident better or more variously supported than the resurrection of Christ.” (Brooke Foss Wescott)
37. “The Gospels do not explain the Resurrection; the Resurrection explains the Gospels. Belief in the Resurrection is not an appendage to the Christian faith; it is the Christian faith.” (John S. Whale)
38. ♪ Up from the grave he arose / With a mighty triumph o’er his foes / He arose a victor from the dark domain… (“Up from the Grave He Arose”)
39. “Our Lord has written the promise of resurrection, not in books alone, but in every leaf in springtime.” (Martin Luther)
40. “The resurrection power of Jesus broke Satan’s captive power. When He led the Old Testament saints from paradise to heaven, He led captivity captive!” (Leon Morris)

41. “Our justification hinges on a risen life, present in us now because Christ is present with us now.” (Paul F.M. Zaul)
42. “Our old history ends with the cross; our new history begins with the resurrection.” (Watchman Nee)
43. “The entire plan for the future has its key in the resurrection.” (Billy Graham)
44. “There is more evidence that Jesus rose from the dead than there is that Julius Caesar ever lived or that Alexander the Great died at the age of thirty-three.” (Billy Graham)

Have a Blessed Easter from the entire Edujandon.com team