Rev. Fr. Ejike Mbaka, the Spiritual Director of the Adoration Ministry Enugu Nigeria, has warned trouble politicians in the country to stay away from his ministry.

Mbaka stated this during his Wednesday weekly prayer meeting, in his prayer ground Umuchigbo-Nike Enugu. 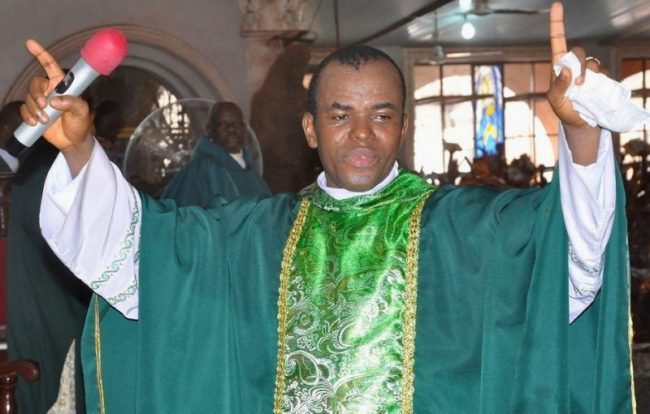 The controversial cleric further noted that his religious inclination was a gift that God bestowed on him, to save the captives and preach the message of God to his people.

He said: “The gift I have is not sold in the market, neither do you get it anywhere in the world. So, when I prophesy you are not in a position to criticize the prophecy I give because it is from the oracle of the Holy Spirit.
“Those who are still plotting for the downfall of the adoration ministry should remember the present condition of Mr. Peter Obi, politically, and if they don’t desist from that, they will be failing in all their endeavours.
“The victory of President Muhammadu Buhari is divine. Could anybody believe that after all the insults that were thrown at him, that at the end of the day Buhari will win the presidential election? So, his victory has spiritual connotation.

“Even in Enugu state, didn’t you see what happened? I told Senator Ayogu Eze the Governorship candidate of the APC that he will not win the Governorship election, that Governor Ifeanyi Ugwuanyi will finish his eight years in Office. Didn’t it happen? Out of over 400,000 votes that were cast, was it not 10,000 and something votes that he got? So my prophecy is not from man rather from God.
“Those of you who are criticising Buhari that he is not doing well should be mindful of your utterances. I could recall in 2012 when there was oil boom in the country I told the Nigeria President then, Dr. Goodluck Jonathan and his associates to save for the raining days and they did not heed my advice, rather they told me not to interfere in politics; that I should mind my pastoral work.
“So, the present hunger and famine in the land was not caused by Buhari but by the Jonathan administration. We should even thank God for giving us a type like Buhari who knows how to spend prudently.”