President Muhammadu Buhari on Thursday launched the Buhari Unity Band , an idea he said was meant to keep Nigeria united as it inched toward the 2019 general elections.
The launch is coming three days to the November 18 , 2018 date set by the Independent National Electoral Commission for the formal opening of campaigns for the 2019 general elections, in which Buhari is running as the presidential candidate of the ruling All Progressives Congress . 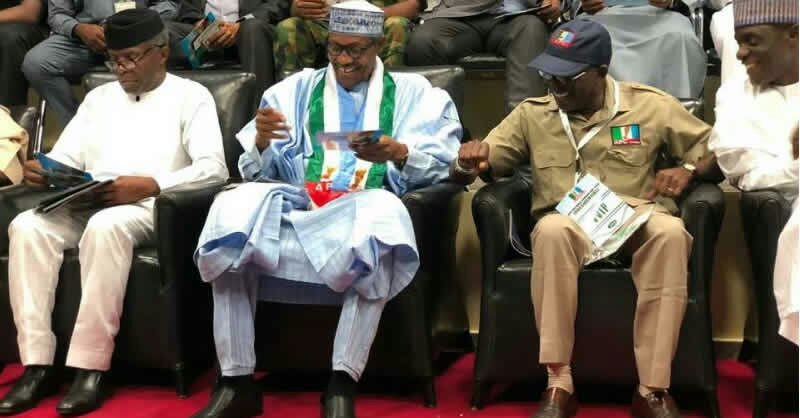 BUB , a collection of the President’ s wristbands , was initiated by the Good Governance Ambassadors of Nigeria , a Buhari support group .

The President , while launching the wrist bands at the Aso Rock Presidential Villa in Abuja on Thursday , expressed concerns about the growing threats in the country in the build – up to the polls .

He stated that his administration was committed to keeping Nigeria together.
“ By the grace of God, we shall remain strong and united , ” the President told the session .

The President continued , “ Our country has passed through difficult times , on occasions threatening the foundations of our unity , but with the help of God , we have always emerged from each crisis stronger .

“ There is no doubt that we still have pockets of issues that question our unity but we are convinced that , with the determination of all Nigerians , we shall remain strong and united .

“ The Buhari Unity Band is a visual and token symbol of our resolve to live in unity as one and to preach the message of unity wherever we live.

“ Those who subscribe to the unity wristband will be known as Nigerian Unity Ambassadors . You will be building on the legacy of a number of our patriots who have, in the past , sacrificed so much , some even their lives , in defence of our nation. ”

The Chairman and National Coordinator of GOGAN , Mr Felix Idiga, spoke of alleged “ malicious ” plans by the opposition to cause confusion during the polls .

Idiga explained that BUB was initiated to counter the plans of the opposition and promote unity among Nigerians .

He did not elaborate on the said plans by the opposition .

But , Idiga condemned what he called “ senseless looting ” of the country’ s resources by the political class .

He noted that in looting the treasury , politicians were usually united and buried their religious and tribal differences .

“ When they ( looters ) are picked to face the wrath of the law , they cry marginalisation and begin to fan the flames of disunity and unrest in the country ” , Idiga further alleged .

On BUB , he said Nigerians who wore them believed in the unity of the country , which was promoted by Buhari .

He spoke more , “ Our ultimate goal is to make all Nigerians peace ambassadors of our country by uniting them with the national outlook for excellence in visual identification symbol.

“ It is a symbol with a loud declaration by Nigerians ; a slogan which says , ‘ no to united looters , yes to a united Nigeria . ”‘

Among the patrons of GOGAN are the National leader of the All Progressives Congress , Asiwaju Bola Tinubu, Chief Arthur Eze and Mr Mamman Daura .

Tinubu, who was represented at the event by Senator Kabiru Gaya, doubled as the chairman of the occasion.