Controversial Nigerian journalist, Kemi Olunloyo has waded into the feud caused by the killings reportedly carried out by Fulani herdsmen across the country.

According to Kemi Olunloyo , the Fulani herdsmen are being targeted and labelled terrorists because of one reason, and that is because Nigeria’s President

Muhammadu Buhari is from the ethnic group.

1. To say Nigerian # Fulanis are a violent group is an exaggeration. The Fulanis have been quietly grazing and herding the beef most of u gulp at your # owambe events. The root of the ongoing problem goes deeper than ethnicity. # hnnact

2. # Fulani herdsmen are being targeted as terrorists because of one single reason. The president is from that ethnic tribe. If u don’t like

@MBuhari , then vote him out instead of accusing him of not controlling a whole tribe. Can Osinbajo control all the

# Nigerian # Fulanis . I will never be afraid of NOBODY in

# Nigeria . The # IPOB boys were more dangerous looking for mayhem. Many were my errand boys at # PHMax & told me # NnamdiKanu even told them to RAPE women and cause ethnic mayhem. Not all Igbos are IPOB.

4. Why are Nigerians not castigating # yoruba leaders over # Badoo shrines and South-South chieftains over

5. Don Waney is dead, Evans is alive. Clearly our police is not working hard is everyone’s mentality. We actually need Evans alive as he has information that could squash other kidnap kingpins in the making. Wake up Nigeria! No woman talks the truth like me.

Recall that a Federal High Court sitting in Abuja recently dismissed an application filed by IPOB, seeking to compel the Chief of Army staff to produce the missing leader of the group, Nnamdi Kanu.

The trial judge, Justice Binta Nyako, also over-ruled the appeal for lack of merit and proof, that the chief of army staff was indeed the last person seen with mister Nnamdi Kanu. 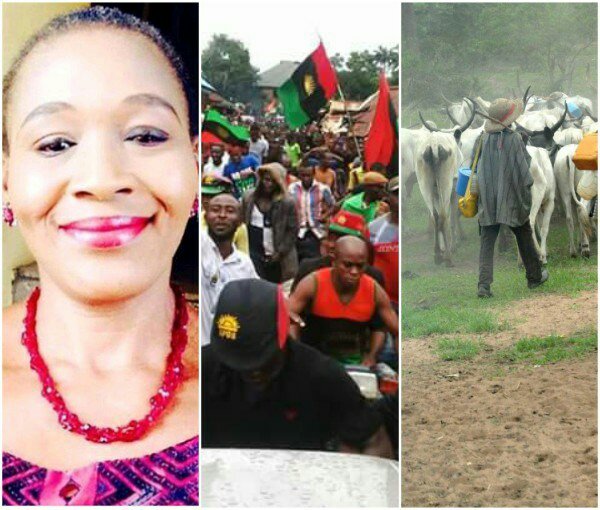