Skip to content
You are here:Edujandon.com » News » So Sad! Three Girls Found Dead After Locking Themselves In Hot Car While Playing (Photos)
News
May 17, 20191 year ago edujandon🏅 0 Comments

It is a sad time for a family after losing three young ones who locked themselves inside a car while playing.

Three little girls were found dead this week after accidentally locking themselves in a family car where they suffocated in 35C heat.
The young cousins named Agatha Morales, nine, Shamel Alghela Morales, eight, and Pauline Keziah Morales, six, were playing together in Bataan province, the Philippines on May 13. 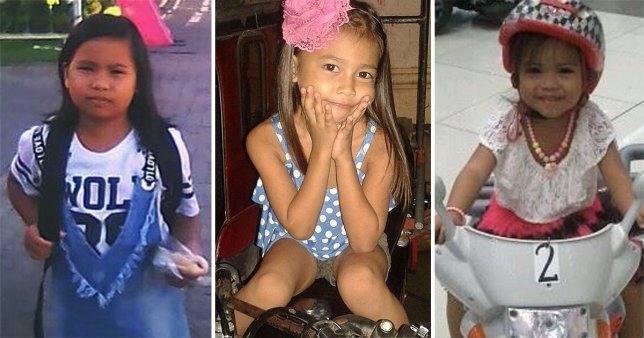 Agatha’s father Jessie Morales, 31, an oil refinery worker, returned home from work at 4pm and parked the green car outside their home. But after going inside to eat, the youngsters are believed to have opened a door and climbed inside to play – before it locked behind them and they were unable to get out again.

A friend of the young girls noticed them four hours later at around 8pm. They were all lifeless inside the vehicle.
She ran to tell the two parents who were at home a few yards away. Jessie ran outside and found the three children inside the vehicle but they were already dead.
Jessie said : ‘They were not able to breath because of the heat inside.’ The family of the victims said that they believe it was an accident and no further investigations should be conducted. They blamed a faulty lock on the car door which allowed the children to climb inside to play but prevented them from opening the door to escape.

The local police are now investigating the case to find out if there was negligence on the part of the parents.
Bataan Police chief Dennis Orbista said: ‘The father opened the door but the kids were not responding. He brought them to the hospital where they were pronounced dead due to suffocation. ‘

To parents of children who are of the same age of the victims, always watch over the children because out of curiosity, they play with all things in the surroundings.’