Skip to content
You are here:Edujandon.com » News » Sports » Guardiola Named Premier League Manager Of The Season
Sports
May 15, 20191 year ago edujandon🏅 0 Comments

The former Barcelona and Bayern Munich coach led Man City to 98 points in the Premier League in 2018/19 and has been rewarded for his endeavours. 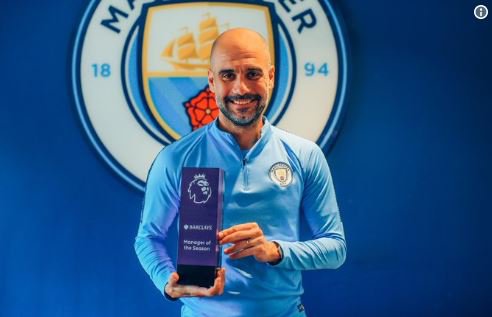 The 48-year-old has collected the award for the second year in a row after overseeing City’s successful title tilt against Liverpool.
Under Guardiola’s watch, the Citizens amassed a hugely impressive points tally of 98 – the second-highest in Premier League history and a total only beaten by City themselves in the previous campaign.
In taking City to a second straight crown, Guardiola is just the third Premier League manager to retain the title following Alex Ferguson and Jose Mourinho.

That was enough to see the City boss fight off competition from Liverpool’s Jurgen Klopp, Tottenham’s Mauricio Pochettino and Wolves’ Nuno Espirito Santo.
“It’s an honour to receive this award,” Guardiola said in a pre-recorded video shown at the dinner.

“I want to share it with my players because they are the artists of everything, to my staff because we fought a lot [against] all the managers in the Premier League, especially Jurgen Klopp, an incredible contender to face till the end.
“It was a pleasure to play against all of them and hopefully do big, big battles again to win an incredible title.”
Lincoln City boss Danny Cowley was named as the League Two Manager of the Season after leading his side to the top of the table on 85 points.
Similarly, League One’s award went to Mick Harford, who won the league with Luton Town.

The Championship broke with form, with Chris Wilder, manager of second-placed Sheffield United, picking up the award in the second tier of English football.
Wilder also beat out the likes of Guardiola, Klopp, Pochettino and Nuno to the LMA Manager of the Year – the award handed out to the top manager across all divisions.
Public votes were combined with those of a panel of football experts to decide the winners of the awards.
Guardiola will have a chance at one more trophy this season, with City set to take on Watford in the FA Cup final on Saturday.