Skip to content
You are here:Edujandon.com » News » Politics » Buhari’s inauguration: PDP, others knock President for not making any speech, Obasanjo, Jonathan absent
Politics
May 30, 20191 year ago edujandon🏅 0 Comments

The inauguration of President Muhammadu Buhari and Vice – President Yemi Osinbajo for a second term in office took place at the Eagle Square in Abuja on Wednesday amidst tight security .

Many dignitaries that attended the event called on Nigerians to support the President so that the country could make progress .
Buhari did not make any speech as he left the venue immediately after inspecting the guards of honour and acknowledging cheers from the crowd .

However , some opposition parties led by the Peoples Democratic Party faulted the President’ s decision not to use the occasion to address Nigerians. They described it as disrespectful , adding that Buhari ’ s action was a confirmation that the President had nothing new to offer the country.
The absence of former presidents Olusegun Obasanjo and Goodluck Jonathan was conspicuous , but two former heads of state , Yakubu Gowon and Abdusalam Abubakar , were at the ceremony. 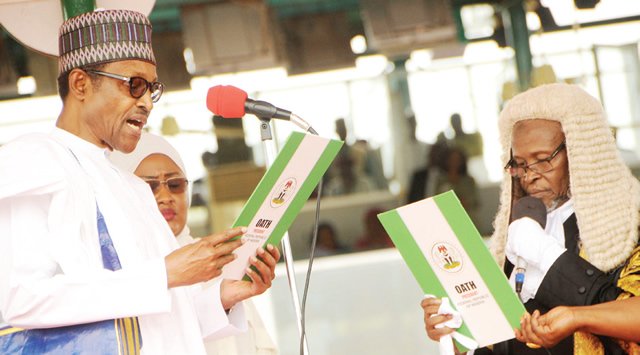 Also in attendance were the Senate President, Bukola Saraki ; Speaker of the House of Representatives , Yakubu Dogara ; the Chairman of the All Progressives Congress , Adams Oshiomhole ; National Leader of the party , Bola Tinubu ; a former Senate President , Ken Nnamani ; a former of Minister of Information and Culture, Lai Mohammed ; a former Secretary to the Government of the Federation, Boss Mustapha ; Ekiti State Governor , Dr Kayode Fayemi , chieftains of the APC and some members of the immediate past cabinet of Buhari .

Osinbajo arrived at the venue at 9 . 45 am with his wife , Dolapo , and they were ushered into the podium with the National Anthem .
Ten minutes later , Buhari also arrived at the venue with his wife , Aisha .
Prayers were offered for Nigeria , the President and other leaders of the nation by the Chief Imam of the National Mosque, Prof Shehu Ahmad , and the President of the Christian Association of Nigeria , Supo Ayokunle.

The oath of office was administered by the acting Chief Justice of Nigeria, Justice Tanko Muhammad , assisted by the Chief Registrar of the Supreme Court of Nigeria, Hadizatu Mustapha on Osinbajo between 10 . 25 am and 10 . 34 am .

Buhari was thereafter invited to the podium to take the oath of office and other duties he had to perform which took almost 40 minutes .

Speaking after the inauguration , Oshiomhole said Buhari was determined to leave behind landmark legacy by the time he completed his second term in office .
He said , “ His real opponents are a section of the elite. He is determined to do everything possible to fight poverty , insecurity , reposition the economy and to ensure that he creates a society where those who work will have something to show for their labour. ”
The Chairman of the House of Representatives ’ Committee on Tertiary Education , Aminu Suleiman , said Buhari needed the support of the National Assembly members to succeed in his second term .
He also bemoaned the frosty relationship between the executive and the legislative arms.

Also , a former Minister of State for Science and Technology , Pauline Tallen , called on the President to include more women and youths in his government . She also called on Nigerians to rally round Buhari .
Opposition parties knock Buhari
However , the PDP , Social Democratic Party and the African Democratic Congress on Wednesday faulted Buhari for not addressing Nigerians after his inauguration .
They also argued that his action confirmed that he did not believe that he was elected by Nigerians and they deserved not to hear from him .

The National Chairman of the PDP , Prince Uche Secondus , who spoke with one of our correspondents , said the occasion offered the President an avenue to appreciate citizens for their patience and perseverance since he assumed office four years ago.
He said , “ Millions of Nigerians and others who were glued to their television sets and those who were also at the Eagle Square must have been sad with the silence of the President. Definitely , his silence was not golden.

“ Many Nigerians were killed in the last four years , hundreds lost their jobs , pensioners not paid and we also lost our sons and brothers in the armed forces as a result of the terror war.

“ Hearing words of assurance and comfort from their commander – in – chief would have served as the needed tonic and also as the expected balm that would attempt at healing their wounds .

“ But instead , what did they see or hear from a man they have expected so much from ? Nothing ! Maybe he felt he owed Nigerians nothing . ”
In an interview with The PUNCH , the SDP’ s National Publicity Secretary , Alfa Mohammed , said the President might have also acted in accordance with the sadness he alleged was pervading the country .
He said , “ You only appreciate people when you are sure that the people ’ s efforts put you in that position . The President might think that he did not owe Nigerians any appreciation and so did not express appreciation .

“ The current mood in the nation is not that of celebration . He might have also caught the bug of the sadness pervading the country. There is poverty and insecurity among others .
“ People are afraid to travel home now . I think Nigerians are not in the mood for any celebration and the President is probably aware of this too . ”
Also , the ADC ’ s National Publicity Secretary , Yemi Kolapo , said the President must have refrained from giving a speech because he had no plan for Nigerians.
She added that Buhari could have also decided to keep mum because he knew that his election was still being contested at the tribunal.

Kolapo said , “ He might have also refused to give any speech because he realised that it is a stolen mandate , the court has not cleared him and so he did not want to jump the gun . ”
Obey rule of law , SERAP advises Buhari
Meanwhile , the Socio – Economic and Accountability Project , has urged Buhari to commit to the respect for the rule of law during his second term .

In an open letter to the President on Wednesday by its Deputy Director, Kolawole Oludare , SERAP said , “ Making a public commitment to dedicate every day of your second term as a ‘ Rule of Law Day’ will help to ensure that decisions of our courts are fully obeyed , refocus , improve and reinforce the anti – corruption agenda ; it will also serve as a reminder that no one has immunity from the law , not even the government .