Skip to content
You are here:Edujandon.com » News » Biafra: Police cautions IPOB ahead of May 30 sit-at-home order
News
May 15, 20191 year ago edujandon🏅 0 Comments

The Anambra State Police Command on Wednesday urged people of the State to disregard the sit-at-home order by the Indigenous People of Biafra, IPOB, on May 30.

The Command urged people of the state to go about their lawful duties as its men would be on ground to ensure their safety. 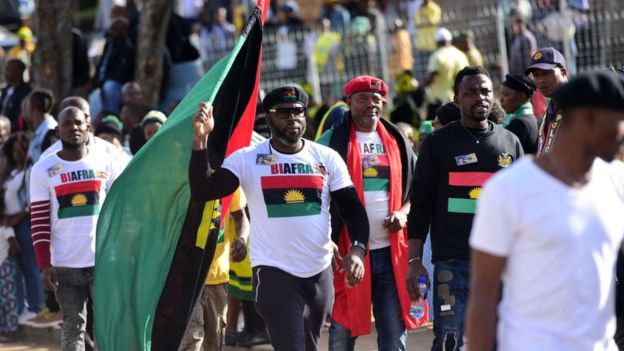 A statement by the Command’s spokesperson, Haruna Mohammed
insisted that IPOB remained proscribed and all its activities are illegal.

The statement reads: “Information at the disposal of the Anambra State Police Command has revealed that the outlawed group, Indigenous People of Biafra (IPOB) are perfecting plans through public announcement and threats in Nnewi and other parts of the State in order to enforce a “SIT AT HOME ORDER” warning people to stay at home and not to come out for any business activities on the 30/5/2019.

“For the avoidance of doubt, the Indigenous People of Biafra (IPOB) is still a proscribed organisation hence all its activities remain illegal.”

Mohammed stated that the Commissioner of Police in the State, Mustapha Dandaura “enjoined all Ndi Anambra to disregard alleged calls by any group urging them to sit at home on the 30/5/2019 and go about their lawful businesses.

“Adequate security arrangements have been put in place by combined Security forces in the State to proactively nip in the bud any threat emanating from such groups.

“Finally, the Command will, therefore, not hesitate to deal decisively with and in accordance with the law any individual or groups under any guise that will disrupt Public Peace in the State.”