Pastor West, founder of Shelter in the Storm Miracle Ministries of All Nation also shared his experience in Europe, how he grew up, surviving as a street boy and lots more.

Footballer turned pastor, Taribo West has revealed why he is the most dreaded soccer star Nigeria has ever produced. In an exclusive interview with Saturday Sun correspondent, BOLAJI OKUNOLA, the former AC Milan and Inter Milan defender opens up on the secret behind his hair, his saddest and happiest moments on the field of play. He also explained how his look and hairstyle resurrected dead bones, his perception about the defensive line up of the current Super Eagles, his prediction for coach Gernot Rohr tutored team ahead of the forthcoming Africa Cup of Nation in Egypt.
Pastor West, founder of Shelter in the Storm Miracle Ministries of All Nation also shared his experience in Europe, how he grew up, surviving as a street boy and lots more. 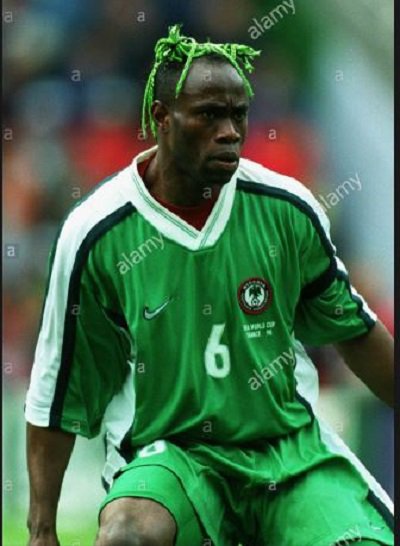 Most Nigerians believe you became a household name in world football from your background as a street boy, can you tell us your growing up?

I grew up from the streets like any other Nigeria hustler. My growing up was fantastic. I grew up in an environment, where one is made to hustle by himself, vicinity where the local gangs were known as the area boys. It’s either you are with them or against them. And I thought it would be better to have them as friends than enemies. Break-ins, fighting, drugs and muggings were the order of the day. Those were the things I witnessed while growing up. If I continue narrating it, we won’t leave here.

After which I found favour and I was discovered by a soccer agent known as Monday Sinclair, who picked me up from where I was playing streets soccer. He recruited me to play for Sharks FC of Port Harcourt.

Before then, I played for Obanta United. I also played for the likes of Enugu Rangers and Julius Berger before I was flown abroad to play for such clubs like Auxerre FC of France, AC Milan, Inter Milan and host of others. “ Na so I become who I be o.”
It’s been a while you hung your soccer boot, how has life been?

Life has been interesting for my family and I. As you can see, am still looking young and charming. As a matter of fact, with my physique I can still play full duration. Most times, I do visit the gym for exercise. I even prefer spending my leisure time with young footballers, so as to keep myself fit and healthy.

What have you been missing about the round leather game?

Sincerely speaking, I have missed a lot. Football missed me and I also missed football. I miss it the more whenever I see my colleagues. Seeing them makes me flash back to the old glorious days. How we won and lost tough games and competition. It has not been easy retiring from what you love doing. Most times, when I look at television adverts, which portrays the image of the Super Eagles, I feel like having the players around.

But sadly, we can’t be together again like we used to be. Everyone is now chasing how to put food on the table for their families. All we need do is to keep thanking God for a successful and glorious lifestyle we have spent together. Left for me, I don’t think I can do something else apart from being involved in soccer.

You played every single minute of the Atlanta ‘96 Olympics tournament, where you won gold and you also achieved same feat during the AFCON 2000 and France 98 FIFA World Cup tournament, what is the secret behind this or is that the coach didn’t love others?

I usually tell people hard work and consistency are secrets behind my success. I don’t believe in other things. Why should I go and beg a coach because I want to feature in a game. It’s not done. Things like that can easily wreck a team. If a player thinks he deserves to play, he should try to prove himself and that’s what I normally do whenever I visit the Eagles camp. I work harder because I don’t want anyone to take my space. Losing a national team shirt is like losing ones life because, if I fumble and others were tested, then I will begin to see myself as a goner. Back then the Super Eagles were filled with a lot of world-class players, who were capable of playing different positions on the field of play.

What are the challenges you passed through while playing for Nigeria?

I passed through a lot of challenges; physically and spiritually. I grew through the ranks; from the Under 17 stage to Under 23 before I finally got an invitation to play for Super Eagles. It was very tough. I usually get prepared whenever we have to play in Lagos. Lagos fans are very daring. You see the fans coming in thousands to watch you train. That alone is enough to gear you up because you can’t afford to give them poor football display. On match days, you will see the fans coming in with various charms. And I can’t blame them because football has to do with a lot of powers. When there are big events, you look at the stadium; you see fans invoking all kinds of things. Magicians are there waiting for your action. It was fun and I’m proud to be among the living legends of Nigeria soccer.

In your days, you can be easily spotted with your dreadlock, did that help you in anyway. And why did you choose to settle for such hairstyle?

My hairstyle is one of the most precious things I cherished back then. It makes me look more dangerous before my rivals. My hairstyle and my look have killed and resurrected a lot of soccer enthusiasts. Strikers get shocked seeing me standing before them and fans regain happiness when they spot the hair in the line up. You know as a defender, you won’t love deadly strikers to come closer to you because if they do, you are exposing the goalkeeper to danger. So one must be mad at times in order to chase them far away and am happy it favours me, because I have achieved a lot through it.

Why did you shave off the dreadlock since you claimed it favours you?

Person don dey old now. You know there are some certain things one has to let go because of religion, age and some other things. Am now more closer to God and I have my own ministry.

Having played for two Italian giants; Inter and AC Milan, how do you feel achieving this feat?

I felt great having played for such clubs. What else can I say after playing with the likes of George Weah, Delima Ronaldo, Fillipe Inzaghi, Nwankwo Kanu and host of others. The clubs were great during my time with them but in life, change is the most constant thing. There are no longer minors in football. Clubs we rated as minors back then are now having buyers who are ready to change their story.

All Milan need do is to buy more experiences and exposed players who can help them regain their fear factor. The club is lacking its fear factor, once a team lacks that, then trouble looms. But am sure with time, they will overcome it. They are not the only club witnessing that. But sincerely speaking, I still see Inter Milan and AC Milan as two of the best clubs in the world. They have very solid foundations. I will forever remember the year we won the UEFA Europa Cup in 1998 and I see the club adding more to their laurels in years to come.

Do you think the Super Eagles have what it takes to win the AFCON 2019 trophy?
Why not? Like I said earlier, consistency and hard work remains the secret to success. Considering the fact that the team is young, I think they will prove critics wrong in Egypt. They are currently in form and I hope they maintain the form.

The fans would be glad seeing them return with the trophy haven missed out of the last two editions. Rohr has proved to be a great coach who knows how to bring out the best from players. Grabbing the Russia 2018 World Cup and the AFCON 2019 tickets speaks volume on how technically sound he is. All we need do is to keep praying and support the boys. I pray they are injury free when the AFCON kicks off properly, once this is done, I think the boys can return with the trophy.