Fortune favours the brave. Unai Emery went for a bold attacking line-up and gained a vital victory over Manchester United that must rank as one of his best during his time as Arsenal manager.It also gave Arsenal the advantage in the Champions League race, as they overtook United to move back into the top four – just a point behind Tottenham Hotspur. “Tottenham Hotspur, we’re coming for you,” the Arsenal fans sang.

United have been so sure-footed under Ole Gunnar Solskjaer but suffered here with goalkeeper David De Gea wrong-footed for Arsenal’s first goal and then referee Jon Moss awarding a controversial penalty as Alexandre Lacazette went over. The Frenchman lost his footing a little too easily. 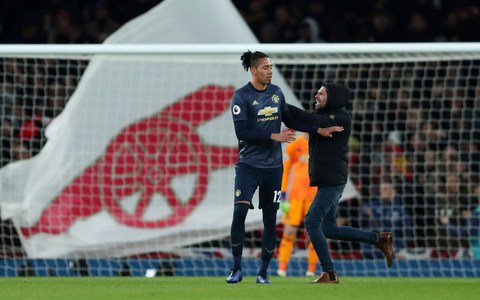 United had their chances, striking the goal-frame twice, but appeared affected by the midweek exertions in their dramatic Champions League win over Paris Saint-Germain.

There was further drama with a pitch invader running on after Arsenal’s second goal. He shoved United defender Chris Smalling to join in the celebrations.
Emery included Lacazette, Pierre-Emerick Aubameyang, Aaron Ramsey and Mesut Ozil in his starting line-up for the first time since September and took the game to United despite having played a European tie themselves, away to Rennes, only last Thursday.

Arsenal dominated much of the first-half and yet had only shot on target, scoring from it. It came as Granit Xhaka collected possession and speculated with a 25-yard shot that swerved, for sure, but De Gea appeared to misjudge it as the ball veered away from goalkeeper and into the net.

It was a powerful effort but the ball did not end up in the corner of the goal and De Gea’s reaction, taking a step to his left, had to be questioned. The light ball? The stiff breeze? They were both factors but for a goalkeeper of his calibre it also appeared to be an error.
The goal was sandwiched by United, although appearing sluggish, hitting the frame of the goal on two occasions. Before they conceded Luke Shaw played a one-two with Paul Pogba and was allowed to deliver a superb, curling cross for Romelu Lukaku who side-footed against the cross-bar from just six yards out when he would have expected to score.

Then, once behind, Pogba laid the ball across the face of the Arsenal penalty area for Fred to side-foot a precise shot that had Bernd Leno scrambling as it hit the outside of the goalkeeper’s left-hand post.

Despite that Arsenal were on top and, after half an hour, with United over-run in midfield, Solskjaer abandoned his 4-4-2 formation and matched Emery up. It meant Ashley Young pushed inside to play on the right of the three-man defence and Pogba switched infield to play behind the strikers.

It evened up the contest also and Leno did well to deny Lukaku after the striker held off Nacho Monreal and attempted to go around the goalkeeper who blocked his shot with his hand before the striker scooped the rebound across the area.

Leno denied Lukaku again early in the second-half after he was picked out by Marcus Rashford, diverting his shot away for a corner although, surely, the Belgian had to score.

Arsenal were under extreme pressure but they got a break – with a penalty awarded after Fred challenged Lacazette. The striker went over, easily it seemed, but Fred was adjudged to have pushed him and the spot-kick was given with Aubameyang rolled it into the net with De Gea diving to his left. It was coolly taken, especially considering Aubameyang had missed his last one in the north London derby.

Soon after and Lacazette broke free, after Victor Lindelof misjudged a header, but dragged his shot across goal before a header from Sokratis was cleared off the line by Pogba.