A Police officer simply identified as Inspector Peter was reportedly shot on Sunday when some suspected political thugs attacked officials of Independent National Electoral Commission at a collation centre in Yewa – North Local Government Area of Ogun State .
Our correspondent gathered that the incident , which occurred around 10 a . m on Sunday, also left others wounded during the attack

It was further gathered that the policeman was among the security personnel drafted to guard the INEC ’ s collation centre at Ketu College in Igan -Alade area of Eggua Ward in Yewa – North LGA . 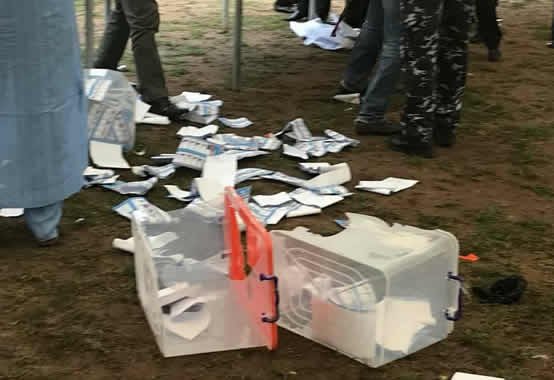 Further findings showed that the hoodlums had laid an ambush at the college, awaiting the arrival of the INEC officials who were in possession of the results and other materials .

The materials in the possession of the INEC officials reportedly included the already thumb – printed ballot papers for the governorship and state House of Assembly elections held in the area .

But as the INEC officials started announcing the results , the hoodlums , who were fully armed with guns, cutlasses and other dangerous weapons, allegedly swooped on them from their hideout .

The hoodlums were said to have started shooting directly at the INEC officials , some party agents and the security men present .

Inspector Peter was hit by the bullets fired by the hoodlums and he fell down .

The hoodlums were, however , chased by men of the Nigerian Army who also retrieved the ballot boxes and materials snatched .

Oyeyemi , however , declined comments on the number of arrests made so far in connection with the attack .