Skip to content
You are here:Edujandon.com » News » Politics » PDP senatorial candidate too small to contest against me – Okorocha
Politics
March 1, 20191 year ago edujandon🏅 0 Comments Rochas Okorocha

Imo State Governor , Rochas Okorocha , has said that the senatorial candidate of the Peoples Democratic Party for Imo West District in last Saturday ’ s election , Jones Onyereri , was no match for him ( the governor ) by all standards .Okorocha made the claim in a statement made available to journalists in Owerri , the state capital , on Thursday by his Chief Press Secretary , Sam Onwuemeodo .

The governor claimed that Onyereri , who is a serving member of the House Representatives , should have stepped down the moment he learnt that he ( Okorocha ) was in the race .

The governor said in other other parts of the country , a politician like the PDP senatorial candidate would not have been allowed to contest against him .

The statement read , “ The candidate of the Peoples Democratic Party for the Imo West Senatorial District election , Jones Onyereri , is too small by all standards and in all ramifications to stand or contest election against Governor Rochas Okorocha .

“ In other parts of the country, Onyereri would not have contemplated contesting the senatorial election the moment he heard or knew that Owelle Okorocha was in the race .

“ But in this part of the nation , anything goes. People have no respect for their superiors, especially when they can afford to buy Land Cruiser Jeep with tinted glasses and two mobile policemen in front of the car .

“ On what grounds would Onyeriri challenge Okorocha in an election , to the extent of claiming victory ? Who was Jones Onyeriri before his entry into politics and who is he today ? 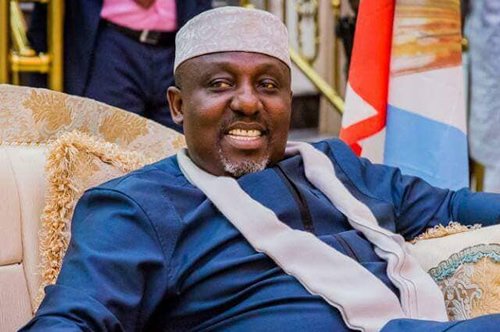 “ Beyond politics , what other claims can he make in this life ? He has the audacity to be challenging a man who has made his marks in every aspect of life long before venturing into politics .

“ Okorocha had run for the Presidency of this country two times – in 2003 and 2007 . Who had heard about Jones Onyeriri during these periods ? Even as a House of Representatives member , what has he done that Orlu zone people would now choose him above Governor Okorocha ?”