Skip to content
You are here:Edujandon.com » News » Politics » My Life Under Threat – Gov Wike’s Aide Who Exposed Videos Of Military Invasion Cries Out
Politics
March 9, 20191 year ago edujandon🏅 0 Comments

Oraye who raised the alarm on his Twitter said that his life has been threatened because of the video which he shared on social media.The soldiers invade the commissioner’s house

Oraye St. Franklyn, a Senior Special Assistant to the Rivers State Governor on Social Media on Saturday said his life and that of members of his family are under threat following series of videos he released on the social media exposing military invasion, excesses and overall intervention in the election process in Rives State. 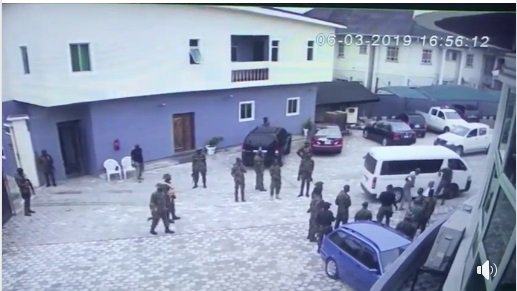 Oraye who raised the alarm on his Twitter account said: “My life is now in danger. Too many plans by soldiers to harm me have been intercepted. You the Nigerian people must know. I didn’t set out to fight the @HQNigerianArmy. What we are fighting for and will continue to fight for is the respect of the rule of law and democracy.”

Recall that only yesterday, Oraye shared a CCTV footage of soldiers who were seen invading the home of Dr. Tamunosisi Gogo Jaja, Education Commissioner, Rivers State on the eve of the governorship election in the state -the video has since gone viral.

Meanwhile, the Nigerian Army says it has begun a forensic investigation of a CCTV footage showing soldiers invading Gogo-Jaja’s residence.

The army said in a statement by its Acting Director, Public Relations, Col. Sagir Musa, that the military would remain neutral before, during and after the polls.