Skip to content
You are here:Edujandon.com » News » Horror! How Deputy Commissioner Of Police Narrowly Escaped Being Beheaded By A Mob In Bayelsa
News
March 4, 20191 year ago edujandon🏅 0 Comments

A deputy commissioner of police has narrowly escaped being beheaded by a really angry mob in Bayelsa state.
The Deputy Commissioner of Police, Kolawole Okunola being dragged along by hoodlums during the presidential elections in Bayelsa State

The Deputy Commissioner of Police in charge of the Federal Special Anti-Robbery Squad (FSARS) in Bayelsa State, Kolawole Okunola, who was abducted by armed thugs during the last presidential and National Assembly election, and brutally manhandled, was at the point of being beheaded when rescue came for him, it has been revealed. 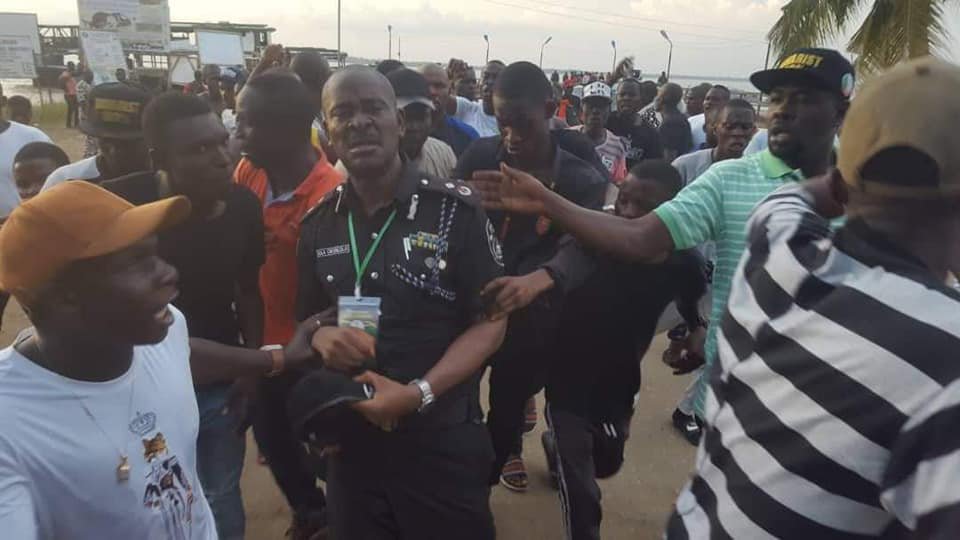 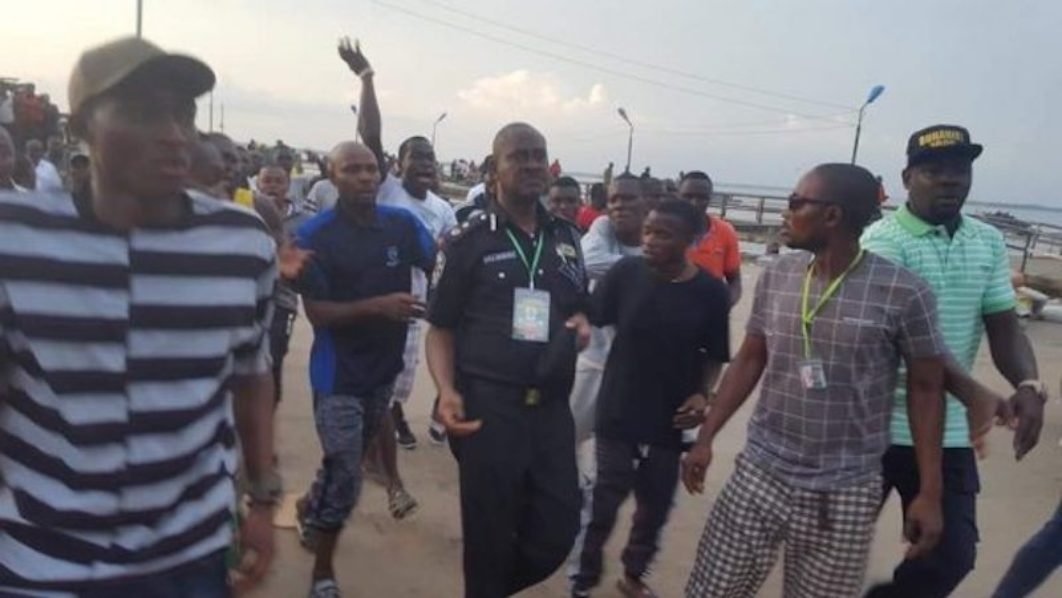 In one of the viral videos that emerged during the first round of elections, the visibly terrified police officer was shown being dragged away by a furious mob.

The officer, who was on election duties at the time he was dragged away, said he was seriously assaulted, and was at the point of being beheaded when succour came.

“It was like what happens in an action film. They manhandled me, and I was attacked severally with clubs and was at the verge of being beheaded when I was rescued,” he said.

Sources revealed that it was the timely intervention, and efforts, of a Nigerian Army captain that saved Okunola, in the nick of time.

DCP Okunola, who had served in almost all the parts of the country, said he was invited to the scene after armed hoodlums in large number attacked officials of the Independent National Electoral Commission (INEC), who earlier arrived the community with electoral materials, in Bassambiri community, of Nembe Local Government Area.

Okunola said the hoodlums had reportedly hijacked and allegedly carted away electoral materials meant for seven wards in the area, and took them to a popular hotel in a bid to manipulate the results. They brought back the alleged fake results to the INEC office when another opposing group who were alerted of the development, started protesting.

According to Okunola, while the group was protesting, the armed thugs that earlier hijacked the INEC materials arrived at the jetty accompanied by a great number of armed youths and insisted that INEC officials must authenticate the manipulated results before leaving the community.

“Since I was on duty in the area, I was alerted to the scene after hearing loud noises coming from the INEC office. I later got to know that the noise was voices being raised by INEC officials and party agents who were having disagreement over election materials and results, which was escorted by party agents from Bassambiri to INEC office. While the party agents were arguing that there were no elections in Bassambiri, and wondered where the results came from, I tried to calm them down, and ask that they write their petition to INEC, but all efforts proved abortive.

“Then in order to avoid imminent breakdown of law and order by the thugs around, I informed the Commissioner of Police and he directed that both officials of INEC and the materials should be moved to the state capital, Yenagoa, for safety. This was agreed with the military officers on duty,” he added.

It was however learned from another officer that it was in the process that party candidates led youths in a large number, and attacked Okunola, dragging and assaulting him with threats to kill him if he failed to direct the INEC officials to go back to the office and continue collation of results.

The officer narrated that as soon as the thugs abducted Okunola, they dragged him to an unknown place where they subjected him to threats, torture, and severe beatings. In the process, his uniform, including its accoutrements, were torn to pieces. They later sat him down in a wooden box and brought out daggers and other dangerous weapons, in preparation of a beheading, in spite of pleas, and the intervention of an army officer.

“Luckily, while they were waiting for the final order by their leader to carry out their threat, mother luck smiled on Okunola, as a message came from one of them that INEC officials have gone back to authenticate the manipulated results. That was how they left the police officer and trooped to the venue to complete their mission,” he said.

It was also gathered that the Deputy Inspector General of Police, Frederick Lakanu, who was swiftly dispatched by the Inspector-General of Police to Bayelsa to investigate the ugly incident had set the ball rolling by visiting the troubled area in Brass Island.

While addressing senior officers at the Bayelsa police command, he condemned the act and vowed to identify, arrest and prosecute all those connected with the assault, their proxies and sponsors. He appreciated the conduct displayed by the officers in the face of the obvious provocation and ordered the reinforcement of officers to flashpoints in the state in order to forestall ant break down of law and order in the state.