Skip to content
You are here:Edujandon.com » News » Horror As 31-year-old Man Is Shot Dead Inside Catholic Church
News
March 4, 20191 year ago edujandon🏅 0 Comments

Suspected assassins have trailed their victim to a Catholic church in Lagos state before shooting him dead.
A 31-year old man, identified as Henry, has been shot dead inside a Catholic Church premises in Lagos by men suspected to be assassins/armed robbers, PM Express has reported. 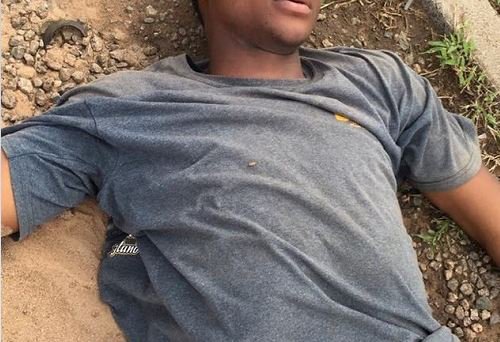 It was gathered that the sad incident happened days ago at the popular adoration of the St Peter and Paul Catholic Church in Oke Afa area of Ejigbo, Lagos.

What would have made the assassins to trail the victim was not yet clear as at the time of this report.

It was gathered that the late Henry left the Catholic faith and joined another church known as Disciples of Jesus located at Church Street in Jakande Estate, Ejigbo area of Lagos.

He was said to be very deep in the church activities before realizing later that he had reportedly joined the wrong faith and then returned to the Catholic faith having known the secrets of the new faith.

That they said did not go down well with the new church who were said to have threatened him and mandated him to return to the faith but he refused before the incident happened.

Henry was said to have gone to Zenith Bank in the area to withdraw money and from there went to the Catholic Church for an undisclosed mission.

When he entered the church premises, unknown to him that he was being trailed by armed men who accosted him, shot him on the head and abdomen and escaped on a motorcycle they used for the operation.

He was said to have bled profusely and was rushed to an undisclosed hospital where he eventually died. The corpse was deposited at the mortuary for autopsy report.

The matter was reported to the police at Ejigbo Division for investigation. The police were said to have commenced investigation to fish out those behind the dastardly act.

The family of the victim reportedly suspected that the late Henry might have been assassinated by the unknown gunmen due to his recent encounter with his new church. Before his demise, he was said to have complained that his life was not safe since he left the church few weeks ago but that remained to be proved because the new church members were not linked to his gruesome murder.

Meanwhile, the corpse was still at the mortuary pending the conclusion of investigations before he will be buried.