A footballer has been caught using a sharp object to attack opposition players in a Turkish third tier league match. 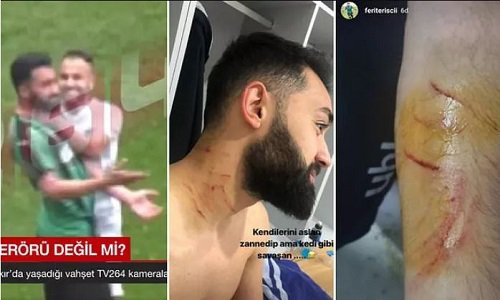 Yazgan showed the wounds on his neck on social media (Image: Ferhat Yazgan/Instagram)

We all know local derbies can be passionate affairs and sometimes things boil over.

But a clash between rivals Amed SK and Sakaryaspor in the third tier of Turkish football featured a frightening incident which took things too far.

According to reports, Amed SK player Mansur Calar concealed a sharp object – believed to be a razor blade – in his hands during the pre-game handshakes.

Shocking footage shows the 33-year-old take a quick swipe at rival player Ferhat Yazgan as he walked behind him just prior to the game before setting his sights on the player again in a shocking attack. 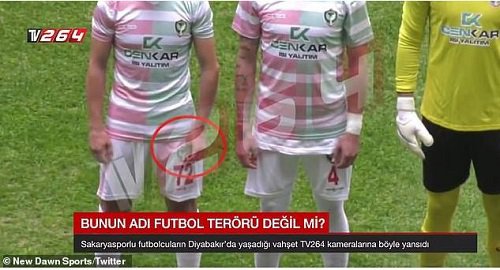 The player was accused of concealing a sharp object in his hand before kick-off (Image: @yenisafakspor/Twitter)

He directed an attack at his throat the second time around, with Yazgan sharing a photo of the injuries he sustained on Instagram after the match.

“These football players who put [sic] the field, TFF, I hope you’ll see them,” he wrote.

Amed SK have released a statement denying their player concealed a sharp object or razor blade to carry out the attack.

The highly-charged encounter ended as a 1-1 draw, with both goals coming via penalties.

But it was the incident just before kick-off that has sparked outrage throughout the football community and seen many calling for a life ban. 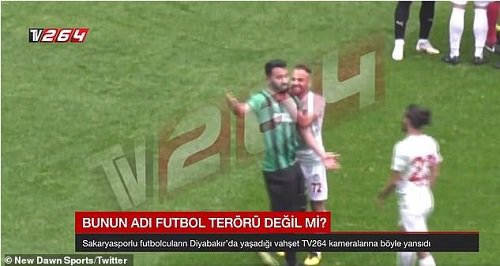 He then attacked a rival player, aiming at his throat (Image: @yenisafakspor/Twitter)

SK released footage of the chaotic scenes on their Twitter account, and although there were no injuries, coach Sertaç Küçükbayrak was apparently kicked

SK Amed are based in the Kurdish city of Diyarbakir and footage of Turkish military operations against Kurdish rebels was shown on the big screen before the game accompanied by Ottoman war songs and ultra-nationalist slogans.