Skip to content
You are here:Edujandon.com » News » Ambode reacts to Lagos building collapse, reveals what govt will do
News
March 13, 20191 year ago edujandon🏅 0 Comments

Lagos State Governor, Akinwunmi Ambode has reacted to the collapse of a three-storey building in Itafaji area of Lagos State.

DAILY POST had reported that many children were on Wednesday trapped in the collapsed building as rescue efforts are ongoing. 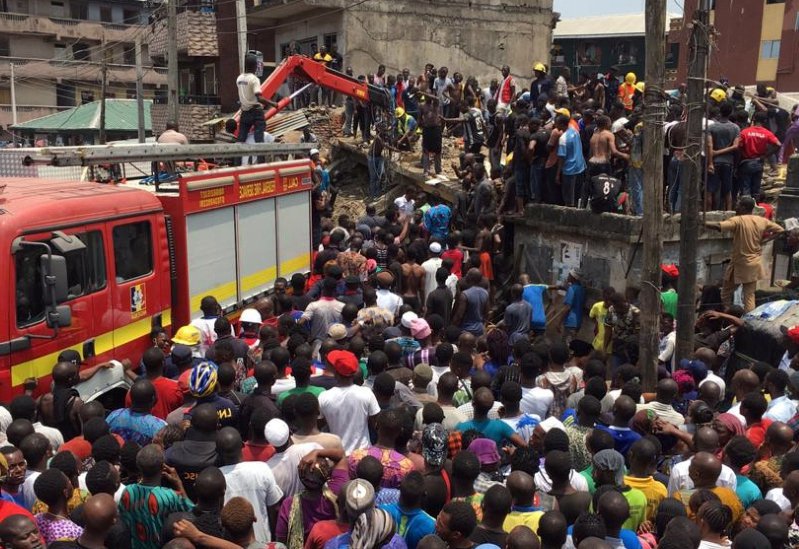 The children are said to be students of a primary school located on the top floor of the building.

The structure is reported to be a residential building with several apartments.
Reacting, Ambode who visited the site of the collapsed building, commiserated with families of the deceased.
Describing the incident as unfortunate, the Governor said 25 people have so far been rescued, while some are dead.

The Governor also promised to demolish buildings that failed the integrity test in the neighborhood.
”What we have observed here and from the briefings, I have received, we already have almost about two floors sunk into the ground.
“The first observation is that this is an old building and it is only the Pent House and the other floors that we have been able to use to rescue people. So far, from what I have been briefed also, we have rescued about 25 people and some already dead but we were earlier informed that it was a school, the building is not technically a school, it is a residential building that was actually accommodating an illegal school.

“All we are trying to do is to continue this operation. Our response unit are already here; we are getting additional cranes to be able to go deeper than where we are now to rescue more lives. I just want to appeal to people that when we are doing this kind of rescue operation, yes sympathizers will naturally come, but I want to appeal that they should give the rescue workers the chance to save more lives.
“Like we have said, we have been carrying out a lot of integrity tests on the buildings in this neighborhood and as you can see some of them have been marked for demolition but we get resistance from landlords but we must continue to save lives and we would intensify our efforts to see that those that have failed our integrity test, we would ensure that they are quickly evacuated and we bring the structures down.
“On the part of government, we would immediately take care of whatever it is that we can do, including the hospital bills. All we are interested in now is to save more lives and also see how those that have been rescued are put in proper place and proper care.

“The General Officer Commanding of 81 Division and the Brigade Commander are here to maintain peace and allow us to save more lives. That is what is important to us and the more lives we save, the better for us.
“This is unfortunate, but we will investigate what has happened and also see the punishment for whoever are the culprits. That is the secondary level but the most important thing right now is to save lives and I just appeal to people that they should give us the chance to save more lives,” he said.