President Muhammadu Buhari has, Monday, threatened intending ballot box snatchers during the coming general election that they would pay with their lives.
Recall that few weeks ago, it was the KAduna state Governor who made similar threats, though directed at the foreign election observers, when he said they would leave the country in body bags if they interfere with the country’s election.

El-Rufai’s comment had generated a lot of reactions and condemnation but the presidency had backed him up, saying his comments were in order but were quoted out of order. 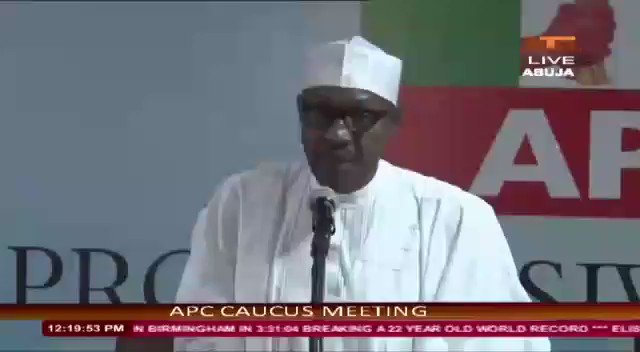 President Buhari, however, gave the threat while addressing members at a meeting of the All Progressives Congress, APC, Caucus in Abuja shortly before the party went into a closed-door session.

According to Buhari, “I have briefed the law enforcement agencies and the military. They have identified the hot spots, flashpoints.

“They should be prepared to move. We have made as much arrangement as possible and resources provided as much as the country can afford.

“Anybody who decides to snatch ballot boxes or lead thugs to disturb it, maybe this is the last lawful action you will take.

“I really gave the military and the police (order) to be ruthless. We are not going to be blamed that we want to rig election. I want Nigerians to be respected. Let them vote whoever they want across the parties.

”“I am going to warn anybody who thinks he has enough influence in his locality to lead a body of thugs or to disturb the voting system, he will do it at the expense of his own life.”

WARNING: “I really gave the military and police order to be ruthless… Anybody who thinks he has enough influence in his locality to lead a body of thugs to snatch ballot boxes or disturbs the voting system, will do so at the expense of his own life." – President @MBuhari. pic.twitter.com/lhvT8yEZR2

El-Rufai Threatens To Prosecute Parents Who Enroll Children Into Almajirai