Skip to content
You are here:Edujandon.com » News » Politics » Oshiomhole Returns From Abroad, See What He Revealed About His Alleged Arrest By DSS
Politics
November 11, 20182 years ago edujandon🏅 0 Comments Adams Oshiomhole

Following his alleged interrogation by security operatives in Nigeria and travel abroad, APC Chairman, Adams Oshiomhole has resurfaced.
The 65-year-old National Chairman of the All Progressives Congress (APC), Mr Adams Oshiomhole, has dispelled news reports that he was arrested by the Department of State Services (DSS). 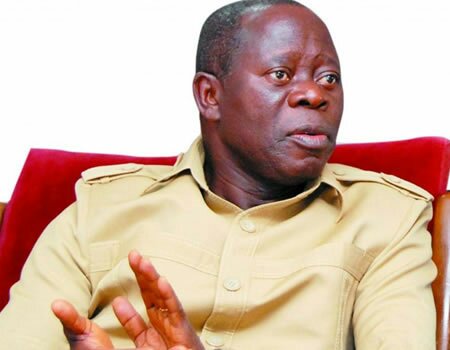 He told journalists on Saturday in Lagos that he “saw DSS only once and it was a conversation, not an arrest or detention”.

Oshiomhole, who is barely five months old as chairman of APC, was reacting to a report by online news platform TheCable that he was detained by the security agency earlier this week.

Giving an insight into what he discussed with the agency, the APC chairman revealed that the conversation centred around APC primaries.

He, however, said , “The question now is whether or not it is the DSS job to interfere in a political party’s issues.

“And if there’s an allegation of corruption, it is the responsibility of EFCC and ICPC.”

TheCable had reported that Oshiomhole was detained and questioned for about nine hours by the DSS on Sunday.

It said that questioning followed allegations that the APC chairman received bribes during the party’s primaries held across the country.

The online news platform added Oshiomhole was asked to resign his position.

Some three governors had earlier been reported to be angry with the Chairman because they lost in their bid to manipulate primaries in their states.

Particularly irked are the governors of Imo, Ogun and Ondo.

Reports say that the governors launched a campaign to collect signatures to pass a vote of no confidence on Oshiomhole who was unanimously elected as the party chairman on June 23, 2018.

Lady & Her Friends Storm The House Of Her Cheating Boyfriend, Destroy His Car (Video)

Take A Look At Mayrock Building: A Promise Fulfilled By Bianca Ojukwu (Photos)