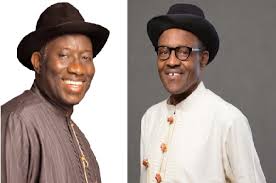 A disagreement has broken out between the transition committees of outgoing President Goodluck Jonathan and the President-elect, General Muhammadu Buhari (retd) as the President accused the Buhari team of acting like a parallel government and trying to stampede the Jonathan administration out of office.

Addressing State House correspondents after the Federal Executive Council meeting, yesterday, Minister of National Planning who is also a member of the Jonathan Transition Committee, Abubakar Suleiman, said the Buhari transition team was making impossible demands from the government.

Although he did not specify those demands, he however warned that the President’s magnanimity should not be construed as cowardice.
Jonathan and Buhari

He said: “We did receive from the transition committee of the in-coming government, some terms of reference which we looked at critically and the Federal Executive Council did agree that Dr. Goodluck Ebele Jonathan remains the current President of this country. The in-coming government should avoid creating a parallel government while the government is still on.

“We take exceptions to some utterances to some of the terms of reference that look as if the current government is being stampeded or intimidated.

“Council frowned at most of the statements. Council members are advised to work in line with the terms of reference of the current government.”

According to the minister, after critically examining the terms of reference of the in-coming government, the government resolved that all agencies of government must continue their duties till the end of the regime, adding that government cannot be intimidated.

He said: “This government remains resolute and committed to the various programmes and projects it’s pursuing and the government will continue to do that until the morning of May 29.

“While Council enjoined members to be steadfast, the President also enjoined members to come out with programmes, projects to be commissioned, that needs to be inspected and that members in council should work as government. They should also perform their work without intimidation and that government, especially civil servants, directors, directors-general should see this government as the current government and not do anything that will rock the boat so as not to put this country in a bad light.

Magnanimity should not be taken for cowardice

“The magnanimity of Mr. President should not be taken to be cowardice and that is why Mr. President and indeed council members enjoined Nigerian people to see the olive branch extended to Nigerians and international community as a way of keeping this country intact, as a way of ensuring peace in Nigeria and as such whatever the outcome of the election, what is important is Nigeria’s national interest. And that national interest should be protected, enhanced and promoted at whatever level we are.”

The minister further revealed that most agencies of government have submitted their handing over reports, noting that “as at April 28, almost all the MDAs that were advised to submit briefs, handing over notes have submitted, and these have been compiled except for one or two ministries.

"I Will Hand Over Terror-Free Nigeria" – Jonathan

“I Will Ride My Bike From Abuja To China If Buhari….”- Charly Boy

JUST IN: Bandits Set Catholic Church On Fire (Details below)

USA African Mission Push as Kanu Finally Get world attention, See What Biden is About to do on Biafra (Video below)

Any cookies that may not be particularly necessary for the website to function and is used specifically to collect user personal data via analytics, ads, other embedded contents are termed as non-necessary cookies. It is mandatory to procure user consent prior to running these cookies on your website.